Mrs. Cassell (1881-1970) was born and raised in Huntington Township and lived there until her death in 1970. She began teaching at one of the Huntington one-room school houses upon graduating from high school in 1899 and taught in three other township schools over the course of the following eight years. In 1912 she graduated with a teaching certificate from Baldwin Wallace Normal School and subsequently taught school at the township Center School and at schools at Columbia Station and Creston. She and Richard "Addie " Cassell were married in 1918 and had one son, Ray, who currently resides in Wellington, Ohio. Mrs. Cassell was an active member of Huntington Methodist Church and the later consolidated Huntington Community Church.

In the year 1818, Joseph Sage induced several families to emigrate from their old homes in the east and commence anew in the nearly unbroken forest of Ohio. The first to make the start was John Laborie, a son-in-law of Joseph Sage, his wife Manila, two small children, Sarah and Anthony, four young men a hired girl and Joseph Sage.

They started on this adventure, February 12, 1818, from Huntington, Fairfield County, Connecticut. The first part of this journey was a sleigh. From Huntington Connecticut to Buffalo, New York this portion of the trip was pleasant. A road had been blazed before them and pioneers welcomed them into their cabins and shared their simple foods with them. But the road ended in Buffalo, so Mr. Laborie led his horses onto the ice on Lake Erie. Traveling on the ice brought real hardships. The party for the first time became hungry. Cabins along the shore were few and far between and the settlers barely had enough food to keep them alive. The horses had to be fed and oats were a dollar a bushel. Warmer weather came and softened the ice and the party pushed ahead, with the horses plowing through slush. Mrs. Laborie became ill from exposure, but every minute counted and the party pressed on.
At the time of the first election, May 27, 1819, the township was five miles wide and ten miles long, including what we now know as Huntington and Sullivan township. In 1822 Huntington became a separate township. These are the slate of officers elected at that first election:

The settlement flourished. About 1820 a post office was established in a new route running from Wooster to the Indian Village (Milan). In 1822 this district of Sullivan became Huntington Township. Both townships, Huntington and Sullivan, were included in the organization of Lorain County in 1824. Sullivan later was made part of Ashland County when it was formed in 1846. The Wyandot and Seneca Indians frequently used this area as hunting grounds. It is reported that their final departure was about 1828.

By the late 1830’s sawmills were established. One was built by Urben Kelsey on the Charlemont Creek, near the west line of the township, and another sawmill by Mr. Ferris on the Wellington Creek, one mile north and ½ mile east of the center. With the coming of sawmills, Huntington had a building boom. As you go down the roads of Huntington, there are many homes and Church buildings built during the 1840’s that are in good shape and still used today.

Sometime during the summer of 1854 a meeting was called to organize the Union Agricultural Society. The society was to promote agriculture with a fair. The officers elected were: President Philip L Goss, Vice President A.M. Parmelee, Treasurer J.H. Welcher, and Secretary J. B. Lang. Its first fair was on ground owned by A. S. Taylor on the southwest corner of State Routes 58 & 162. The ground was fitted by volunteer labor. The success of this fair was very satisfactory, and it was decided to hold another fair the following year, under the same management. This fair was also a success. (It has been told that the first fair had a merry-go-round that was turned by a horse on the inside of the ring). Having no permanent buildings or enclosures, so that gate fees could be taken, its finances were small. After this year, a proposition was made to move the exhibitions to Wellington. The location of this Wellington site was where the public school now stands on South Main Street. This site was used until 1869 when the present location was leased from Wellington Township.

In the year 1857, a map shows the population of Huntington to be 1,173. It was during this time that Lorain County’s first railroad, the Cleveland, Columbus, Cincinnati and Indianapolis Line (the Big Four) was routed through Wellington. The maiden run from Wellington to Cleveland was made on August 8, 1850. As a result of the railroad going through Wellington, growth ceased in Huntington. There were as many as 17 houses that were uprooted and moved to Wellington. In the Lorain County News June 5, 1867 the population was 983. 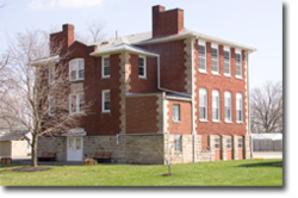 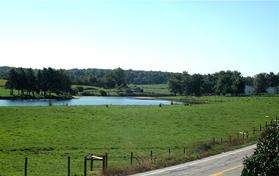 Benjamin Banning, one of the early settlers in Huntington Township and the first adult death.  Read more about Benjamin click here.  He was buried in his own orchard, the location across the highway from the old Cassell home as noted in Yesteryear by Ethel Cassell.