When Ansel Clarke built his Route 58 home in 1840 he became part of the Underground Railroad. Legend says runaway slaves stayed in a three foot space between the living room and bedroom during daylight until they could be transported to Oberlin and eventually across Lake Erie to Canada. The house had trap doors in the attic and flooring that could be raised to enter the basement. Burton Pratt lived in the home more than 80 years. He moved to the home with his parents in 1874 when he four years old.

Three year old Hattie Pratt was the subject of an Archibald Willard painting named “Blue Girl”. Hattie died of diphtheria in 1862 at 3 years of age.  The painting was done from a photo a few years later. There is an obelisk in Huntington Cemetery inscribed with the four Pratt family names: Benjamin - father; Alta - mother; Jerome; Hattie.  What is believed to be Hattie's headstone was found under a post of an outbuilding on the Pratt farm in the 1990's and is currently on display at the Huntington Historical Society Museum.

For more informationon the Underground Railroad click the link below. 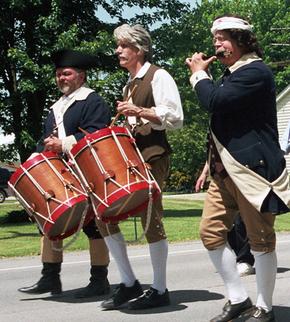